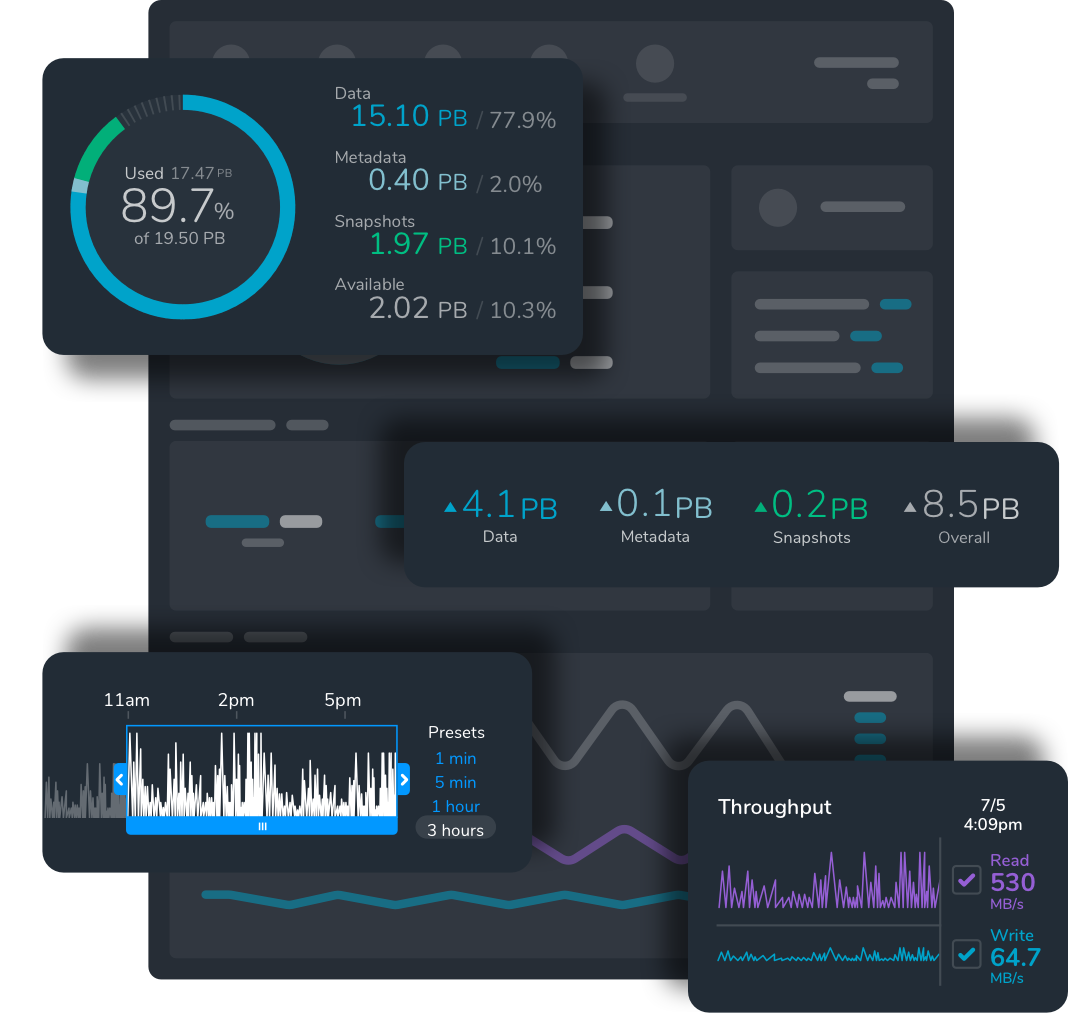 Qumulo software is a distributed hybrid cloud file system, developed to offer you flexibility, running on industry standard hardware and natively in the cloud. The first file system built to address your hybrid cloud workloads, whether you require burst computing capabilities, global data collaboration, or if your business is considering a migration to the public cloud.

Scale without limits: Scale to billions of files across your data center and the cloud. Symmetrically scale capacity and performance.

Get instant insight into billions of files: Real-time analytics help save time, save money, and increase performance.

Harness the power of the cloud: Single software package and licensing model scales your data from a wide range of on-prem platforms to the cloud.

Qumulo File System: How it Works

Qumulo’s file system offers you real-time visibility, scale and control of your data from your data center to the public cloud.

Software-defined and built for the hybrid cloud.

Qumulo’s distributed file system gives you the option of running on pre-configured hardware platforms, pre-qualified third-party hardware platforms from HPE or Dell EMC, or natively in the public cloud with AWS or GCP.

The Qumulo file system license is fully transferrable between on-prem and cloud-based platforms so that your investment in our software is usable no matter how your storage strategies evolve in the future. Built for today and tomorrow’s file storage workflow needs, with Qumulo, your data is available when and how you want it.

Real-time analytics show you what’s happening with your data.

Get instant visibility into your data and users. Qumulo software assigns the aggregation of real-time metadata to all data as it’s ingested. This gives you real-time insight into your system, without performance degradation or long file system scans.

Free up your time from mundane administrative tasks with visibility into crucial information:

Qumulo’s hybrid cloud file storage provides a single namespace, exposed across protocols, that provides a vast number of users centralized access to files whether the data is on-prem, multi-site, or in the cloud.

Remove data silos and eliminate a tangle of multi-volume mounts.

Qumulo’s snapshots capture the state of your file system or directory at a given point in time. With Qumulo’s snapshots feature, you can restore single files and whole directories with the click of a button. And you have access to snapshot capacity data and usage over time through Qumulo’s robust analytics platform.

Erasure coding provides data protection at the block level and is faster, more configurable and more space-efficient than alternatives such as mirroring and RAID. Erasure coding enables you to leverage 100% of your usable storage, with no performance degradation.

Set and implement quotas in real-time, not just when a directory is originally created. Qumulo provides you the ability to instantly limit the capacity of a user’s directory, and you can apply these quotas to any directory (even nested ones).

Accessible through NFS and SMB protocols, Qumulo’s single namespace functionality allows your team centralized access to files, whether you’re operating on-prem, multi-site, in the cloud, or any combination thereof.

Qumulo’s continuous replication provides you with continuous one-way asynchronous replication across storage clusters, whether on-prem or in the public cloud. This feature leverages snapshot capabilities to ensure consistent data replicas. Qumulo takes it a step further, applying smart algorithms to make sure data replicates as often as practical without negatively impacting your overall cluster performance.

Qumulo’s auditing feature integrates with standard monitoring systems and tracks users by both their IP address and AD user. With auditing, you can track all data access, writes and modifications, and you can scale your system to millions of IOPS with minimal performance impact. And you can track all protocols including SMB, NFS, FTP, and API.

Programmatically retrieve all information presented in Qumulo’s user interface with REST calls. Store them externally in a database or send them to another application such as Splunk or Tableau. You even have the capability to invoke file system operations with the REST API to automate administrative tasks, saving your valuable bandwidth for the work you’d rather focus on.

The speed of flash at the cost of disk

The most efficient, high performance archive solution on the market.

Digitally transform your business with the scale and flexibility of the cloud.